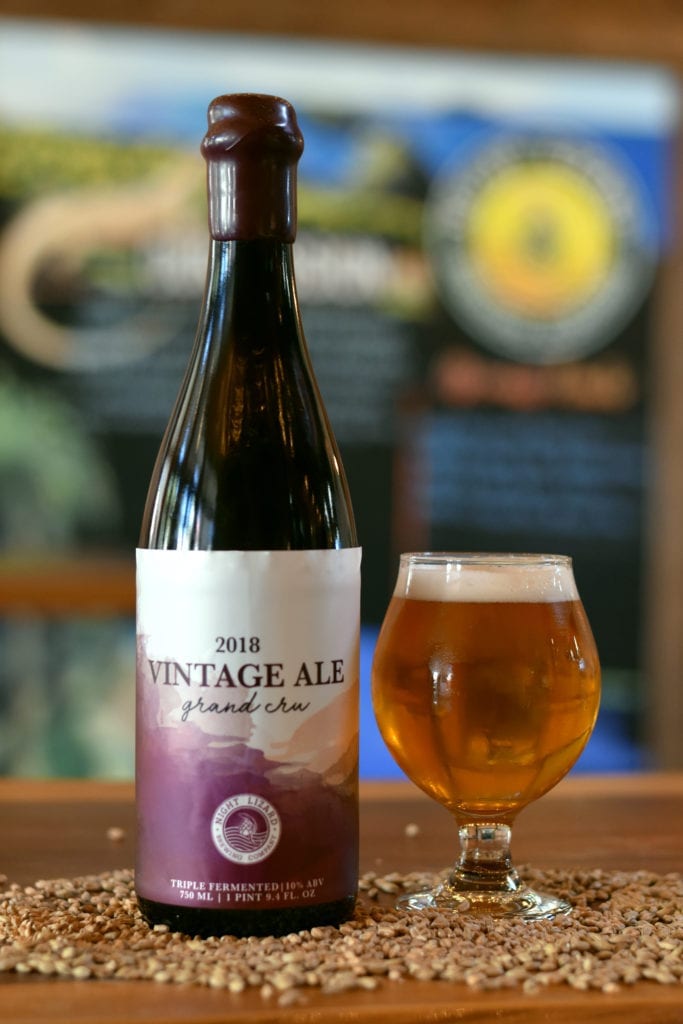 When a wine is designated a grand cru, a term meaning “great growth,” it’s traditionally an indication that the grapes hail from the best land of an already-esteemed vineyard. And since there’s a saying, “Grapes make wine, people make beer,” it sort of follows that when a beer is designated as a grand cru, it’s an indication that the brewer is putting his or her best foot forward. So it’s a bit perplexing that Santa Barbara’s brand-new Night Lizard Brewing would put that name on one of their first-ever beers (in the grand scheme).

Given that grand cru isn’t a specific style, brewer Chip Nasser made a 10 percent-alcohol beer that could be described as a Belgian strong golden ale or an imperial saison. It’s fermented with French saison yeast from the Senne Valley. Despite that region’s inextricable connection to funky, wild lambics, the result is not remotely lambic-y or sour.

Consumed on draft, the beer opens with a great aromatic hit of pears and cloves and finishes with a taste of apples ’n’ honey. It’s also the first bottled release — with the bottle conditioned and wax-dipped for optimal maturation — making this ripe for buying now yet also for gift-giving if you’ve got any birthday parties coming up. The Grand Cru Vintage 2019 will contain a component of this batch of Vintage 2018, so the 2020 batch ought to be in the solera method, featuring little bits of each vintage moving forward.

The moment you’ve all been waiting for… our lu

Have you tried our new Begian Tripel? This bad boy

We’re super excited to be hosting the @santabarb

Happy Tuesday!🍻 Did you know we’re a dog frie

Another week = another line up of great events at

New! We’re excited to share that our saké is ba

Oktoberfest is happening! Come on by for $1 off ou

Poppies, milkweed, yarrow and sage are just a few

Looking to get down? Join us every weekend for LIV

Monday blues? Don’t sweat it! We have a week ful

We are a 16 tap brewery! Our regular beers are nam

T-8 days until Night Lizard Oktoberfest! We can’

To celebrate we will have drink specials all day l

Tonight at 8pm @artoffunk is performing! During th

Yosemite, Rocky, Channel Islands, and Haleakala… what do all of these #nationalparks have in common? 🦎They’re our staff’s favorite places to explore! 🌲 Join us on Thursday and geek out on the beauty that surrounds us! 🌋 Hosted by @blackdogtrivia and sponsored by @rei, this is an event you won’t want to miss! ... See MoreSee Less

Looks like this disappeared from yesterday! Check out our events for the rest of the week 🗓 We also have happy hour every weekday from 3 to 6 PM 🍻🦎 we can’t wait to see you soon! #visitsantabarbara #santabarbaraevents #sustainablebrewing #savetheplanetonebeeratatime ... See MoreSee Less

Another week filled with goodness! We can’t wait to have you in the taproom 🍻 and for those who have been waiting… our lupine porter is back! See you soon 🦎 #santabarbaraevents #visitsantabarbara #santabarbaraliving ... See MoreSee Less

Thank you to everyone for supporting us!