Posted at 14:24h in Our Brews, The Brewery by Meg Nasser
Share 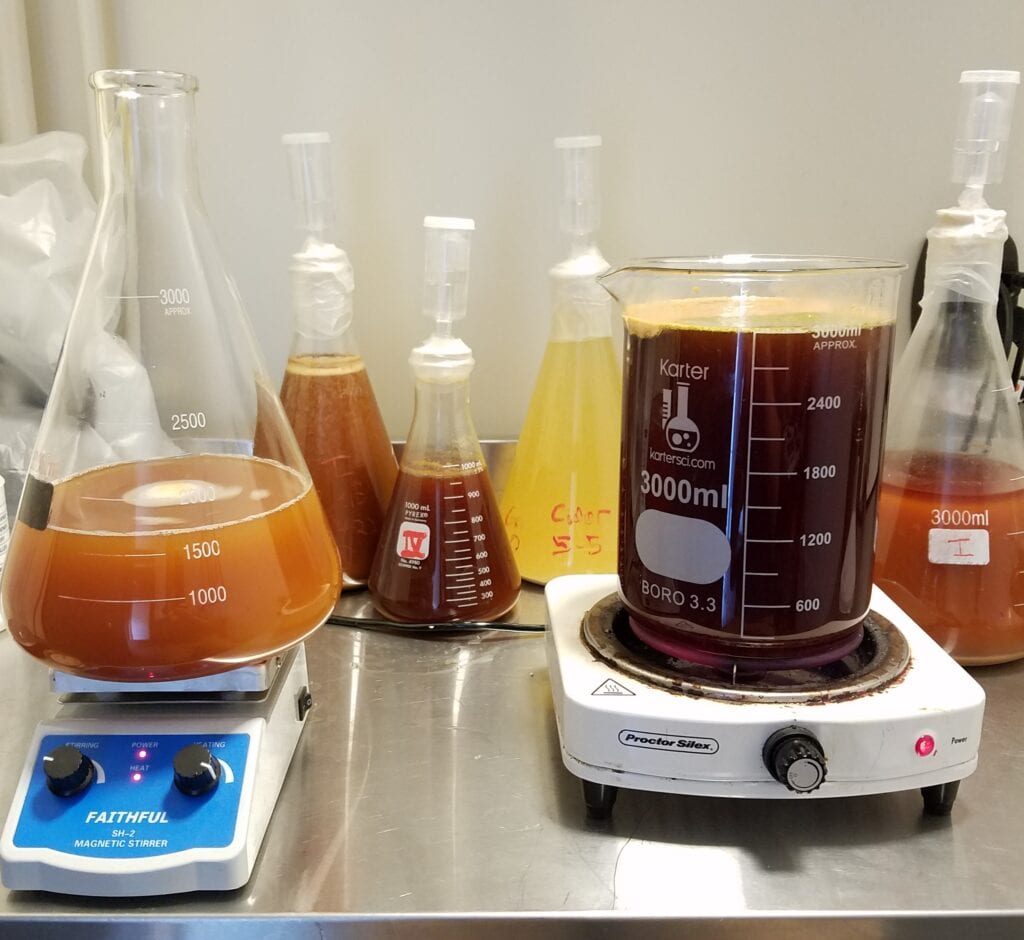 First, we made 12 mason jars of neutral, low IBU wort (sugary, pre-beer mixture). Then we placed these mason jars, with open cheesecloth covered tops, at 12 different locations around Santa Barbara. We let the mason jars sit out at their locations for 48 hrs then capped them and placed them in a cool, dark place. After 7 days in the dark we observed, smelled, and tasted the jars…. Some tasted like beer, others like rotten vegetables. Of our 12 mason jar samples, 2 appeared to be viable local wild yeast strains (Mason jars I & IV). Mason jar “I” was placed on top of our Kombucha barrel, so it is truly a Night Lizard Brewing Company “Wild House Strain” as it was collected from the air in the brewery. Mason jar “IV” was placed in the top of one of our brewers 10 foot flowering Myer Lemon tree, most likely yeast from insects or humming birds.

We washed and isolated the yeast then prop-ed (re-grew with new sugar-rich wort) it into a 1 liter erlenmeyer flasks. After the yeast had eaten all of the sugar in their respective 1 liter flasks(pics online), we made two 5 gallon batches of beer with very little hops in them. We then pitched each respective wild yeast strain into the 5 gallons of beer and now they are in the cold box settling out.

Happy Saturday! Live music is back at the brewery

Trivia night is TONIGHT and it’s wild animal the

Good morning all! We’re back to flowing taps tod

What a beautiful Sunday 🌞 Happy Easter everyone

April Fools’ Day is tomorrow, so we thought what

Good morning and happy Tuesday! It’s a beauty of

Trivia Thursdays are back in action starting tonig

TRIVIA THURSDAYS ARE BACK AT NIGHT LIZARD! Kicking

UCSB vs. Creighton game will be UP on our giant sc

Now that we have moved into the Red Tier, we are n

Can always count on a Saturday to bring back the s

Fight off your gloomy Sunday scaries with us! Our

A groovy weekend ahead indeed! We’ve got some aw

Looking for a new piece to add to your closet? Pre

The weekend is HERE and the sun is OUT 🌞 It’s

When this happens, it's usually because the owner only shared it with a small group of people, changed who can see it or it's been deleted.
View on Facebook
· Share

This week’s Trivia Thursday will be wild animal themed! 🦎 Test your knowledge on the creatures of the outdoors and get a chance to win a free flight of beer. 6 people MAX per team.

April Fools’ Day is tomorrow, so we thought what better trivia night theme than The Office! 🖨 Do you often find yourself quoting Michael Scott, Dwight Schrute, or even Creed? Show off your knowledge on this extraordinary TV show with your pals tomorrow night @ 7 pm!
#trivianight

TRIVIA THURSDAYS ARE BACK AT NIGHT LIZARD! Kicking the first Thursday off with some throwback hits from the 2000s 🎶 Grab some pals & come hang with us Thursday night @ 7 pm!

Starting tomorrow, we’re doing Hump Day Hoppy Hour every Wednesday at the brewery. 🐪🍺 ALL DAY OUR IPAs WILL BE $1 OFF! If you’re an IPA lover, Wednesdays are your day here at Night Lizard.